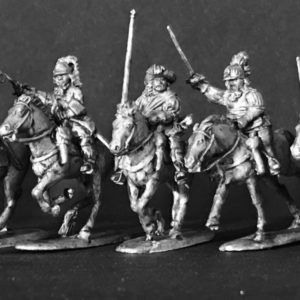 ECWF1 Company of Pike advancing with pike shouldered, in mixed equipment. These are representative of early war but usable throughout the conflict; pikemen being the backbone of infantry in the ECW. Usually equipped with breastplate and pot helmet but armour became increasingly unpopular, possibly because the pikes protected them from Horse and the cumbersome weight the armour needed to be to stop shot would be exhausting to march in. Pikemen were crucial in protecting vulnerable shot troops from Cavalry.

Pack contains all different figures and contains 24 pikemen consisting of 6 heavy with tassets, 6 medium with breastplate and helmet, and 12 with no armour or just a helmet.