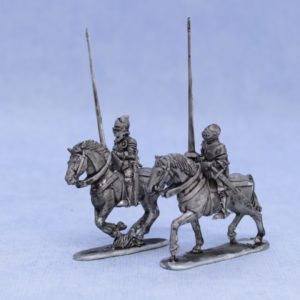 The left-hand knight wears a mid to late 15th century Italian harness modified to western european taste. He also wears a great bascinet a helmet that was mostly used in tornament by this time, however medieval paintings suggest some knights continued to use them in the field much later and this one would have been of the lastest design circa 1450.

The central knight wears a heavily ribed and protective late 15th century harness in the style commonly seen in England, note the brass oak leaf helmet ornaments which add to the English feel. Noblemen armed like this would have been of the highest wealth and status.

The right-hand figure wears a mid 15th century Italian harness, with an open faced helmet and weas riding boots – he’s designed to have the look of a veteran mercenary commander.

This pack includes a standard bearer, with coat and riding boots.