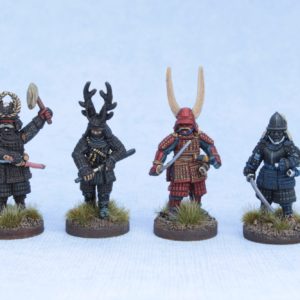 DYMO 01. Toyotomi Hideyo and his hatamoto

Toyotomi Hideyo and his hatamoto.

Toyotomi is sitting on a tiger fur decked chair wearing a gusoku he later gave to Date Masamune, his helmet held by one of his reatiners is decorated with warfans and bear fur.

His greater and lesser standards are carried by retainers wearing tiger fur jackets. One of his bodyguards is depicted wearing a gusoku of which there are a number of identical examples surviving.

On his left is Toyotomi hidetsugu his adopted son. His kabuto has an interesting crab like mon, and on Hidetsugu’s left is his great standard.

These figures will require wire spears to mount the banners on, and the large red fukinuki is a resin casting.